We are pleased to announce, effective January 1, 2018, our affiliation with our longtime friend and colleague Robert E. Kendall, MAI, SRA. Bob’s former practice in Wooster, Kendall Appraisal Group, Inc., closed at the end of 2017 following retirement. We welcome all former Kendall Appraisal Group clients to our 4th generation practice in New Philadelphia and will be happy to serve your needs moving forward. 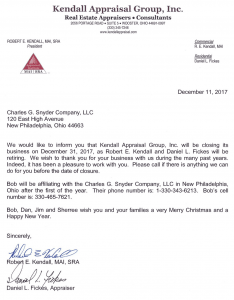 “We would like to inform you that Kendall Appraisal Group, Inc. will be closing its business on December 31, 2017, as Robert E. Kendall and Daniel L. Fickes will be retiring. We wish to thank you for your business with us during the many past years. Indeed, it has been a pleasure to work with you. Please call if there is anything we can do for you before the date of closure. 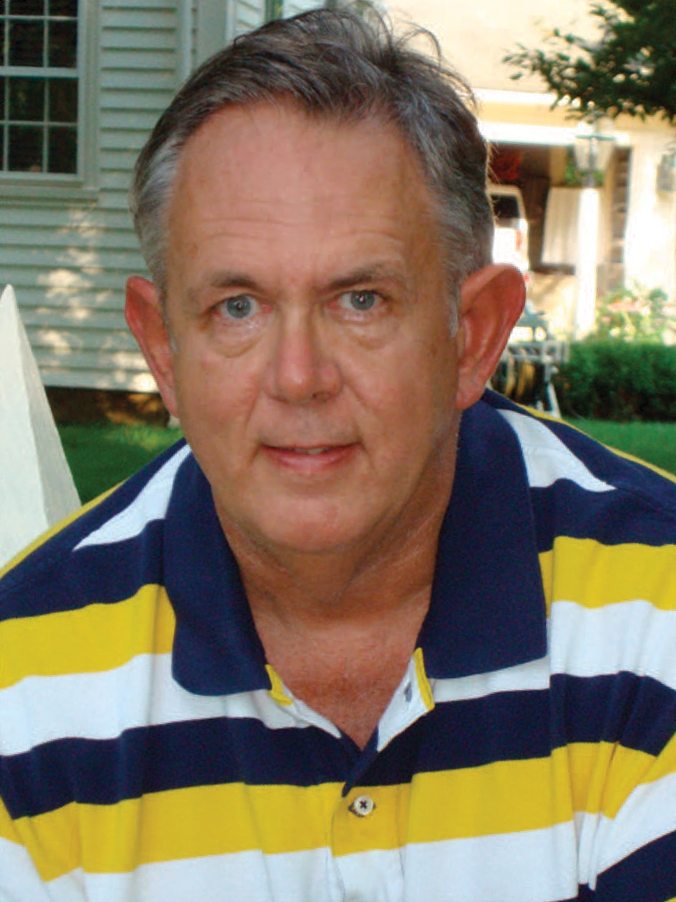 With a new performance season comes new leadership, and the Tuscarawas Philharmonic community welcomes Gil Snyder as its new board president. The announcement was initially made in the August 2011 newsletter, which can be downloaded here.

Snyder joined the board several years ago because he is motivated by worthy causes and good things for the community, and he is energized about his new role as president. “I’m really excited about it,” he said. “I think the opportunity is here for us.”

His use of the word “us” is no accident, as Snyder recognizes the need for collective effort and the importance of leadership through delegation. “I love nothing better than to empower others to act,” he declared.

As a life-long native of New Philadelphia, Snyder is fully invested in the community as both a businessman and a philanthropist. After college, he followed his father’s lead, as well as his grandfather’s, by starting his own real estate and appraisal business, Charles G. Snyder Company. He is also a partner in Shepperd Investors AG, a global real estate business headquartered in Zurich, Switzerland; and he is CEO and president of Integrity Health Partners, Inc.

Snyder has been instrumental in bringing out-of-the-norm music to the community. His influence was key to hosting local performances by the Vienna Boys’ Choir; and to staging The Long Night of Music, a four-night event held in New Philadelphia in 2005. Boosted by these successes, Snyder hopes to bring that same far-reaching energy to the Philharmonic board, saying, “Let’s get out of the box and see what we can do.”

Snyder has set specific goals for the coming year, just one of which is to take each Philharmonic performance from the concept of “concert” to one of “event,” where attendees are given the opportunity to enjoy the total social experience. “I would like people to start coming to see the Philharmonic at the PAC because it’s the place to be,” he said. And he has a similar goal for board meetings, believing they should be events people look forward to attending.

The newly installed leader’s optimism for a successful season is contagious. “Gil possesses a genuine enthusiasm for music and for the Philharmonic—I’ve seen it when he sings in the chorus—and a strong, imaginative sense of community, along with business savvy and connections,” said Eric Benjamin. “He’s the total package, and I am inspired by his presence on the board.”

Snyder and his wife, Tricia, have a passion for antiques and historic architecture, and the couple doesn’t shy from hard work. After purchasing an 1848 home in Gilmore, Ohio, they set about dismantling the structure and moving it to New Philadelphia. Throughout the eleven month process, they meticulously tagged every element from bricks to hinges to doorknobs, and they rebuilt the house with respect to its architectural style. They plastered the walls according to the home’s historic nature and filled its rooms with period furnishings and artwork.

Snyder put such painstaking work into his home because he believes in the value of perpetuating the best assets of our community. He said he understands that although he has paid for his belongings, they will someday belong to someone else, and he is merely the current custodian. He has the same approach to guiding the Philharmonic through the upcoming season, saying, “We are caretakers. We want to nurture it and make it better than it ever was.” 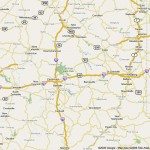 Charles G. Snyder announces continued growth of appraisal consulting specialized services. Mr. Snyder, General Certified in both Ohio and West Virginia, announces growth in appraisal activity along the Ohio River corridor. Recent economic developments and the need for qualified valuation estimates has provided expansion of efforts on behalf of Banks, Savings and Loans, and governmental agencies. The company cites increased business activity as a result of bank failures and lenders seeking assurance of mortgage positions in a generally declining market.

The Charles G. Snyder Company is pleased to announce that Mr. Snyder was unanimously elected to serve as Trustee for the Tuscarawas Philharmonic.  Mr. Snyder is a long time financial supporter and advocate for the arts in Tuscarawas County. In addition to active participation in the Philharmonic’s Vocal Chorale, he continues his decade-long support as an annual event sponsor for the local based non for profit orchestra. 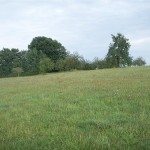 In a continued effort to offer diverse appraisal expertise, Mr. Snyder has successfully passed the examination requirement for the course Appraising Conservation Easements offered by the Appraisal Institute of which Mr. Snyder is a dual designated member. The analysis of easement valuation requires specialized training for which Mr. Snyder has successfully passed the most recent course offering for this special interest valuation. Sponsors of the examination included the Appraisal Institute as well as the American Society of Appraisers, the ASMRA, and the Land Trust Alliance.

The Charles G. Snyder Company remains open and committed to serving our client base during the COVID-19 pandemic. Our facilities are operating with shifted staff schedules and therefore we recommend email communication for the best response time. We are accepting and processing orders as appropriate in keeping with all standing E.O.’s